Though fifty years have slipped away
Some memories are as fresh today.
I’ll try and bring them back for you
As they come creeping into view –
Of 21 and 82.

So brave they were, so young and gay,
Living only for the day.
Fighting hard and playing too
Doing what they had to do
With 21 and 82.

Their Bristol Blenheims rode the skies.
In action no – one heard their cries.
Mortal combat with the Hun,
Losses huge but battles won
With 82 and 21. 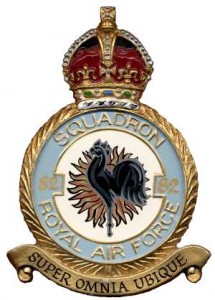 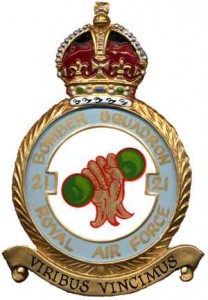 To war from Bodney and from Watton,
This must never be forgotten.
From Norfolk fields they flew,
So very old they quickly grew
With 21 and 82,

The engine turns and fires and roars
And Chiefy’s shouting “On the Doors”
Perfectioned training showing through
Professional in all they do
That’s 21 and 82,

Stroll past the hangars on your own,
You will never be alone.
They will walk with you and share your views,
You’ll be with all those famous crews
Of 21 and 82.

So bow your head in November

When it’s time to remember
Think of what they gave for you,
The boys in Barathea Blue.
Of 21 and 82.

An Instrument Maker with 21 Squadron, Tommy was so moved when he attended his first re-union, he wrote this poem as a tribute to the men he served with on 21 and 82