In 1937 Watton, set in the heart of Norfolk, was a small market town with a population of just over 1,400, but great changes were taking place which were to completely alter the life style of the town. With the new R.A.F. Station, the building of which started the previous September now getting into full swing. Gone forever were the days when everyone knew everyone else and if a stranger was spotted he, or she, was almost certainly a ‘holiday maker’. Now it was different, with but a few of the many strangers to be seen in the town in 1937 being holiday makers, mostly they were workers on the “camp”.

February saw the opening of the new Regal Cinema, the first purpose built cinema for the town. The Regal will no doubt be familiar to everyone stationed here. There can’t be many who didn’t make the trip to the “flicks” at some time or another. 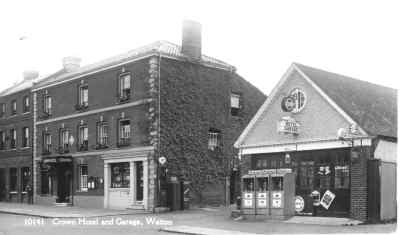 May 12th. was the Coronation Day of King George VI, when the children and senior citizens were given a tea in Col. Barnham’s sale rooms, but heavy rain during the afternoon and evening caused the postponement of the Sports and Firework display, much to the disappointment of all concerned. This part of the celebrations was re-arranged for June 1st. On Monday 5th. July the town had it’s very own coronation, when Edna Howe was crowned at Loch Neaton as Carnival Queen for the week by her predecessor, Vera Golding.

There were ten (1 per 140 souls !) Public Houses in the town, namely, The Crown pictured right – the garage nearest us would become the Rendevous Cafe, The Bull, The Kings Arms, the New Inn, Railway Tavern, Green Man, Black Horse, Carpenter’s Arms, Jolly Farmers and The Dog and Partridge. During the previous decade three others had closed, the Live And Let Live (now Weatherills), the Red lion (now Barclays Bank) and the Chequers (no relation to the Chequers at Griston).

During the next few years three of those those pubs in particular were to become favourites with the wartime crews of the RAF. Officers, for the most part, frequented the Crown Hotel, while the other ranks of 82 Squadron adopting the Kings Arms in Middle Street, and for 21 Squadron, The New Inn became the drinking venue of choice.

Of the ten open in 1937 only the first three remain today, however, during the last few years two new ones have opened, The Willow House and the Hare And Barrell at West House formerly the home of Mr. Bloomfield the veterinary surgeon.

The Chairman of the Parish Council was Gordon Delph, a chemist, and the other members of the council were R.G. Holmes, J.W. Stokes, G.H. Earle, A.T. Edwards, T.W. Milford, F.H. Bird, A.W. Julnes, W. Whalebelly, G.W. Trollope and E.A. Lovewell.

Frank Dye was offering “The New Ford Ten Saloon” for £150, R.G. Holmes & Son, the “Austin Ten Cambridge” at £168, While John Ridout could supply the “Flying Standard 12” for £209.The Coronation Year Carnival Programme, packed with all the events of the week and many advertisements in its 78 pages cost just 3d. (just over 1p. in present day currency. )

Being in the heart of Norfolk, it should be no surprise to learn that Watton had two large cattle markets, Hall & Palmer’s and Barnham & Son. The former usually had about 200 cattle in their weekly sales and the special monthly sales attracted up to 400 cattle and 300 pigs and a thousand or so poultry. Barnham’s had fewer animals, but their poultry, eggs, butter and vegetables etc. far exceeded Hall & Palmer’s with 20,000 to 25,000 eggs being sold each week.

The old Steam Fire Engine, which had served the town since 1925, failed to meet the requirements of the Road Traffic Act and after a satisfactory demonstration a new Merryweather’s “Hatfield Trailer Pump” was purchased by the Parish Council at a cost of £545. Following this acquisition, premises at the Green Man Inn at Harvey Street (now gone, replaced by Barclays Bank) were used for housing it and all the equipment used by the brigade. Donald Moore was the Captain of the Fire Brigade.

The Wayland Agricultural Society held their annual show on the meadows that now comprise, East, South, West and George Trollope Road sites with Sydney George continuing to act as Secretary and Treasurer.

Mrs. E. Betts was the proprietress of the Wayland House Country Club situated where the entrance to Nelson Court now is.

The two doctors were Dr. J.H. Boag and Dr. G.L. Plumbly. The Cottage Hospital situated on the site of Victoria Court on the Thetford Road had Miss N. Godson as Matron and Mr. A.T. Edwards as secretary.

The Police Station was on the corner of the Norwich and Thetford Roads with Sgt. George Brunson in charge.

Rev. B.J. Failes was the vicar of St. Mary’s Church and the Rev. L. Kemish the Methodist minister.

The Railway Station master was Mr. H. Leach, and Mrs E. Utting was the postmistress.

Mr R. Woodcock was manager of Barclay’s Bank and Mr A.C. Leaker manager of Lloyd’s. The Ministry of Labour Office on the Thetford Road had Mr. F. Lockwood as manager.

This piece was written by the late George Jessup, a keen local historian